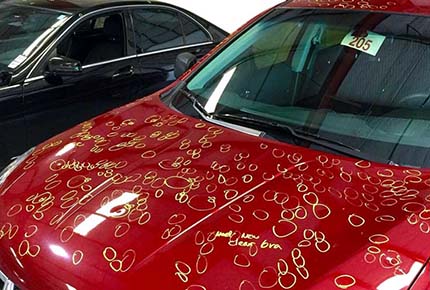 Funnily enough, paintless dent repair was invented accidently in 1960 by Oskar Flaig. Oskar was a staff member for Mercedes at the International Sports Show where he was in charge of repairing any nicks, scratches, bumps or dents that were caused by those viewing the cars at the show. He decided to use a hammer to push out a small dent and to his surprise, he did not need to repaint that spot on the car. Oskar then returned to Germany and mastered this technique which later made its was to the United States in. 1983.

Traditional repairs requires you to add filler to the body of your vehicle. This filler is then paint matched as best to your vehicle but typically requires a more precise paint match by another shop or professional. The filler does exactly as it sounds… simply fills in the dent of your car rather than repair the dent. This can lead to structural issues later on for your vehicle and affect the resale value as well. PDR restores the body to its original position, eliminating the need for fillers and paint matching.

Auto Hail Zone provides you with expert knowledge and capabilities when it comes to dent repair. We have mastered the technique of PDR which allows us to repair hail damage, dings, and fender benders to bring your vehicle back to its showroom condition. When you get your vehicle back you won’t be able to tell there was ever damage and that is what makes us different. When you need any body repair in or near Colorado Spring make sure you call us at (719) 237-5294 or visit us at autohailzone.com